What Would Twiggy Do?

My fashion dream when I became pregnant was to find some 1960s style dresses with empire waists, loud, colourful prints and bell sleeves, somewhat like the glorious dresses below. 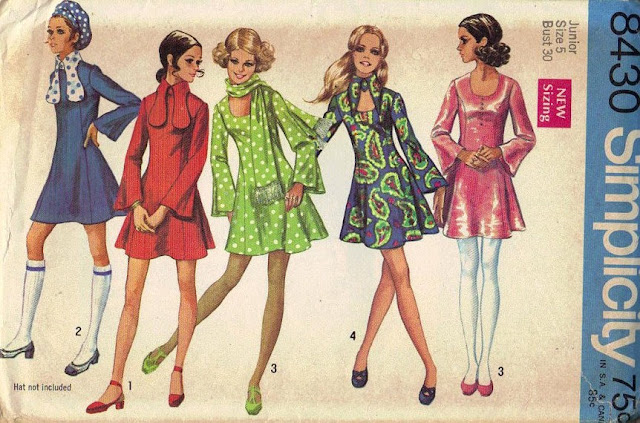 Unfortunately, they only existed in my imagination. However, I was lucky in that I found one sweet dress, which I call the Twiggy dress. It's a simple, cute, white summer dress. 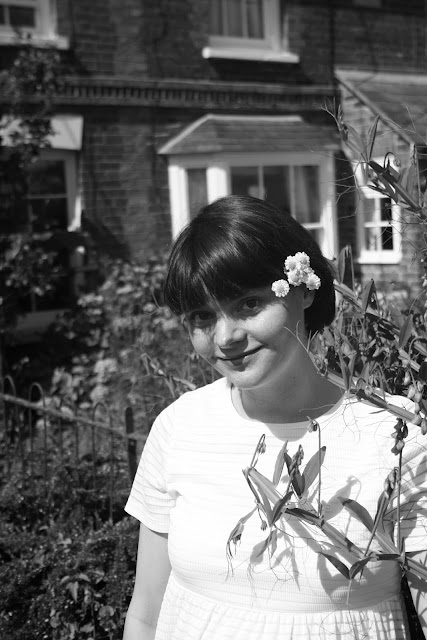 (The dress demanded some mini daisies.) 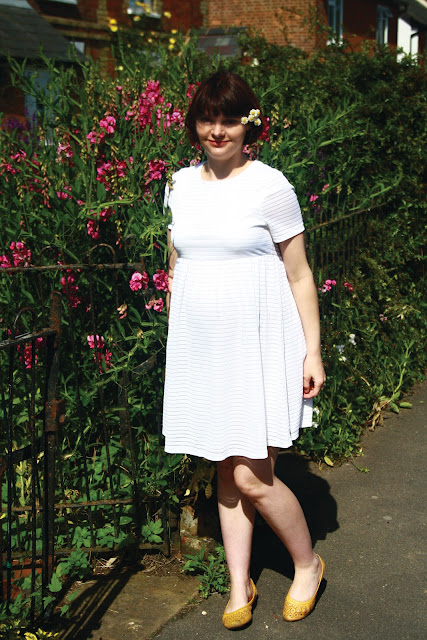 
And finally, a classic photo of the insouciant, Lolita-like Twiggy at her finest. Only Twiggy can make slightly frustrated boredom look this alluring.


A white dress and some peaches evoke summer for me. What are your summer staples?
Posted by Lauren at 23:11 3 comments: Links to this post

In the Fields of Barley

With less than three weeks until my due date, I almost feel a sort of responsibility to photograph the bump in a (hopefully) flattering way. Fortunately, the barley and wheat fields near my house have the look of being wonderfully soft and the sky was wonderfully dramatic. If the bump frightens you, focus on the scenery. 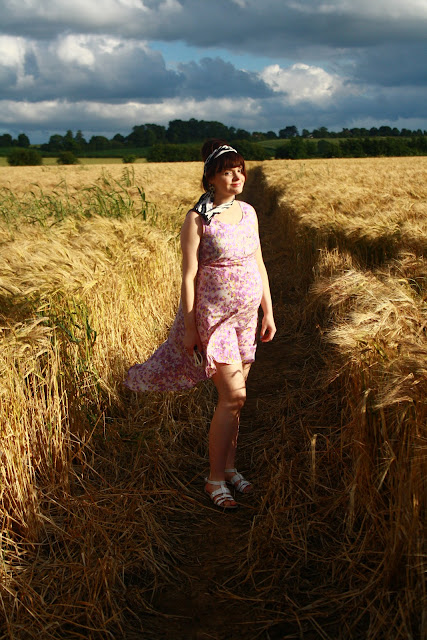 I went for a mini beehive and some crystal earrings. I like to think of this outfit as for someone called Joanne who was meant to go to a cocktail party on a summer night in Palm Springs in 1965. Poor Jo was transported to England and needed an extra layer, hence the black top. 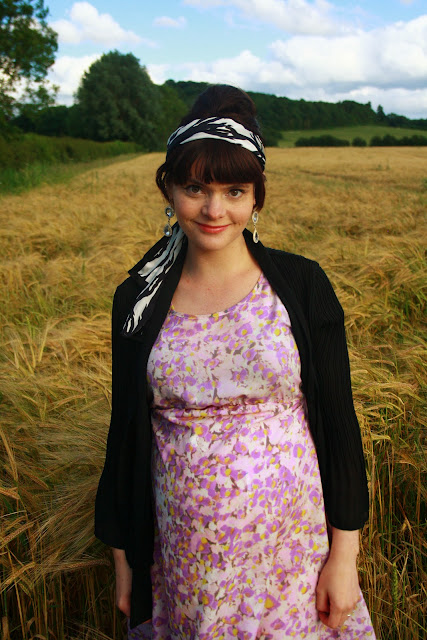 Outfit: Earrings, Accessorise (in the sale); maternity dress, Topshop, scarf, Next (from about 3 years ago); black top; Winners (Canadian version of TKMaxx). 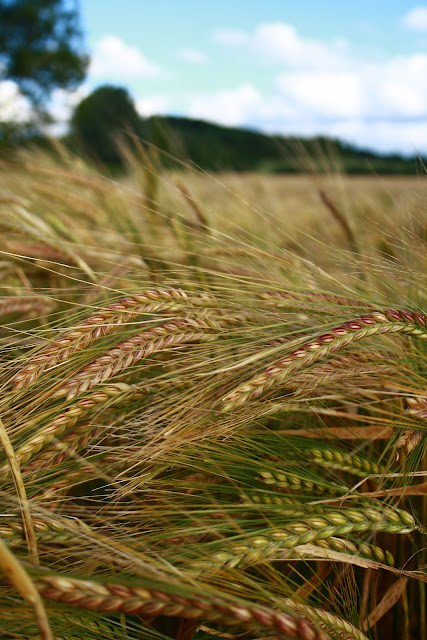 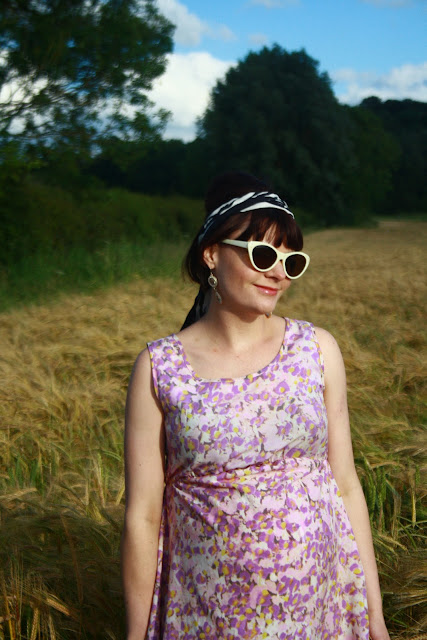 Wistfully dreaming of more sunshine. What are you looking forward to this summer?

Do you like an overblown Bohemian Rhapsody style BIG SONG?

It's a hilarious, dramatic, fascist-style marching song by Muse. It's complete with an operatic, dark monk chorus, a very high guitar solo (there's more than one actually), Matt Bellamy doing his best cod-Wagner, and some 1980s style synth drums from the Van Halen Jump era. 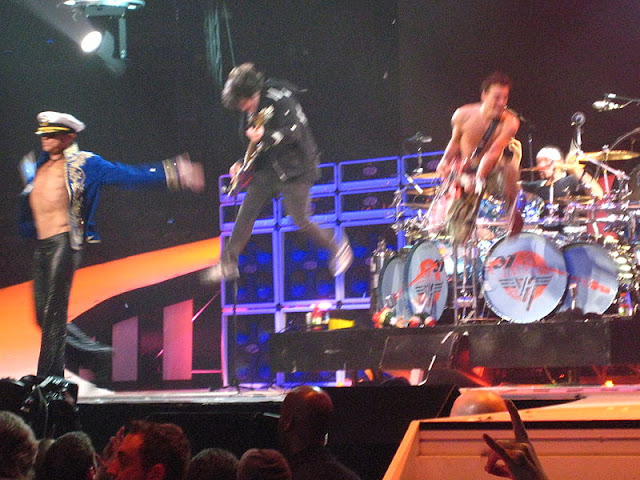 Depending on your sense of irony, you'll either think this might be the best thing about the Olympics, or perhaps a piece of terrible contemporary prog rock that needs to be put in the wastebin of joke songs quickly. I haven't quite decided where I stand.

Apparently, this song will be played before the medal ceremony. I can't wait to see some awkward archers and fat weightlifters aproaching the podium, slightly taken aback by the melodramatic chorus provided as soundtrack. Inevitably, there will be a glorious moment when Bolt listens to the song, and gives us a lightning bolt.

Here's the song. You must listen to it.

And as an added bonus, in tribute to the music of excess, here's another image of Van Halen in their finest hour. 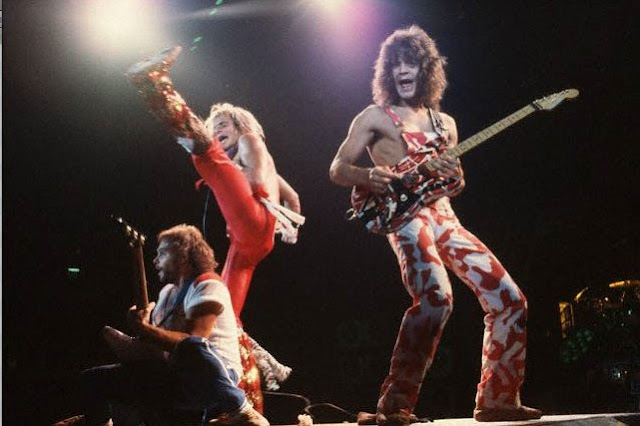 Are you looking forward to the Olympics? Or are you like many cynical Brits and finding it all slightly ridiculous?

Posted by Lauren at 22:04 No comments: Links to this post

You gotta admire Ridley Scott. His work is full of chutzpah, philosophical ideas and is commandingly stylish. The last sentence sounds like a description I might read of Miuccia Prada or any other wannabe designer. Fortunately, Prometheus, lives up to Scott's reputation. Like a lot of supposedly conceptual fashion though, I would say it is more style than substance. 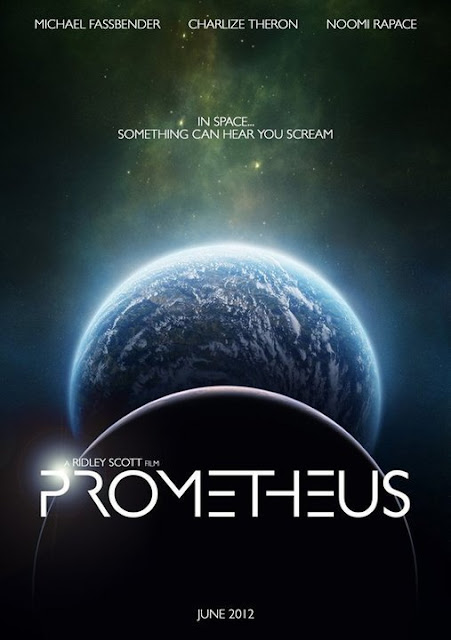 Prometheus asks the questions, what if we evolved from aliens, and what if, they were the more advanced life form? To write this makes the film sound completely ridiculous. It is science fiction, but it also has quite a sublime aesthetic. The aliens are visceral, slimy and dominating. I normally hate special effects, or at least the artificial look of CGI. But the aliens movement and appearance makes them creepy and captivating to watch.

Tensions abound between virtually all of the characters in the film. This is best personified by Charlize Theron's character, Meredith Vickers. She spends most of the film as an aggrieved daughter who is huffing her way through her father's desires (the father is played by the ancient looking Guy Pierce) to uncover the origins of life and alien existence. By the end of the film, I was really taken by her no-nonsense attitude. It's like she's irritated at other people's histrionics and just wants the sensible, simpler option. To do this though, she maintains a cold persona.

Michael Fassbender's performance is also notable. His perennially focused eyes are eerie and he convincingly plays the robotic character with a lack of humanity. His greater than human capabilities seem to have an underlying, twisted quality. 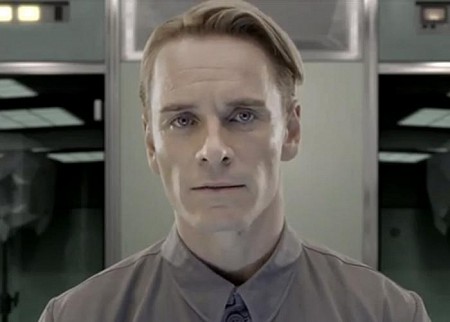 The lead character and Christian moral compass of the film, Dr Elizabeth Shaw, played by Noomi Rapace, is very much in the mould of Sigourney Weaver's Ripley. Her strength and determination (and her rather gorgeous partner, Charlie Holloway, played by Tom Hardy)  fuel her desire to uncover why the aliens are infecting and attacking the crew.

I've never actually seen the original Alien, though I gather it is markedly similar, but I would say this is more than worth watching in the cinema. I saw the regular version, but I do think the inevitable aliens coming out at you, would be huge fun in 3D.

4/5 stars, for an imaginative escape.

Look at the amazing sci-fi B movie style poster for Prometheus below. A fan apparently created it. If I was more of a sci-fi fan, I'd want to buy it. As it is, I''m still coveting its glory. 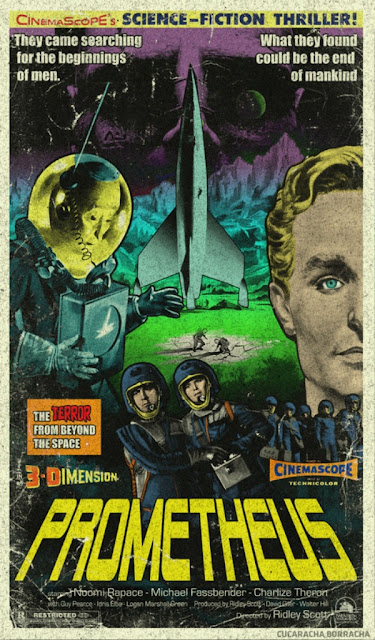 What summer films are you excited for? I'm very impressed with the trailer for Luhrmann's The Great Gatsby. Could it ever possibly be the grand American romance tragedy as the book?
Posted by Lauren at 19:08 3 comments: Links to this post

Back when it was still horrible winter weather in summer, some food gave me the impression of summer. This summer grill, consisting of polenta, tomato and red pepper kebabs with a yogurt dressing and cucumbers allowed me to believe I was on a patio on the Med. You know the terrible cliche, "it's summer on a plate," well let me give it to you, as this is. 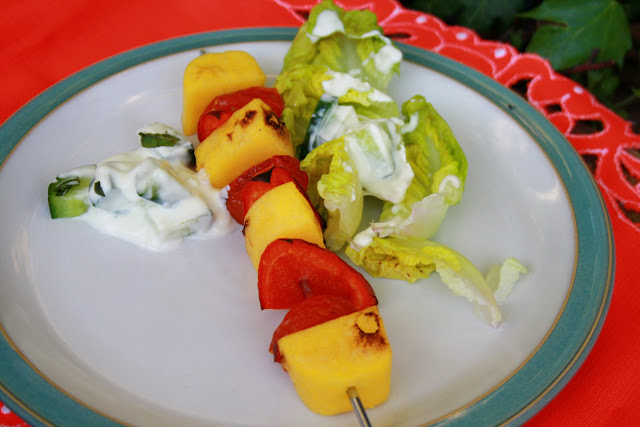 This looks more like the portions for a starter, and while I do think it would make a highly satisfying starter, I had a couple of the kebabs with a big salad, the cucumber tzatziki and some bread. If you know what's good for you, make it a meal. Grilling the polenta caramelizes it and crisps it up- put it on the BBQ if you prefer. The juice and sweetness from the tomato and pepper seep into the polenta. You could easily marinade the kebabs in an oil and herb dressing (I'm thinking of pesto) and obviously use whatever vegetables you like. Still, the cucumber, garlic, lemon and mint yogurt dressing is more than enough of a compliment and flavour to make you eager to eat.

Recipe for a Summer Meal for Two
1. Chop up a block of polenta, tomatoes (I quartered 3 Roma-sized tomatoes) and a red pepper into suitable sized chunks. Put onto kebabs to resemble the 1970s classic, pineapple and cheese on a stick.
2. For the tzatziki, finely chop 1/2 clove of garlic and 1/3 of a cucumber. Add to about a half a cup of yogurt (I used low fat Greek style), the juice of half of a lemon and a small handful of mint leaves (chop the bigger ones). 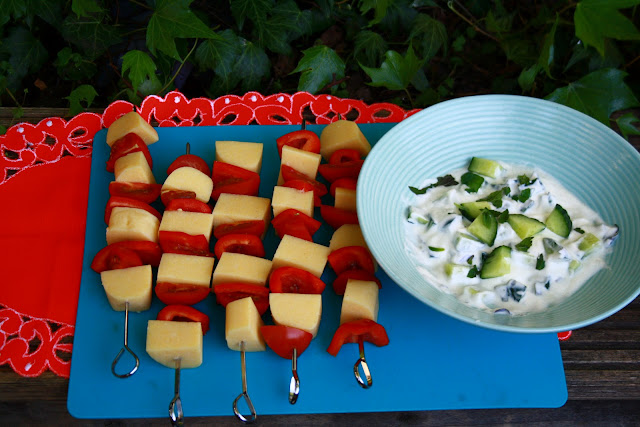 3. Grill/BBQ on each of the four sides. The first two sides take longer as they're getting everything cooking. The first side took me about 8 minutes; the second side about 5 minutes and the others about 3 minutes on a high grill. If you like more of a subtle golden colour, go for a medium or low grill. I was going for the BBQ effect.

Happy BBQ season.
Posted by Lauren at 20:24 2 comments: Links to this post

Bruce Springsteen, The Boss. I'd like to rename him, though he'd never accept my title. I'd rename him the Prophet, or The Wise Man, or The Voice of America. Superlatives don't quite touch Bruce Almighty. His latest album, Wrecking Ball, is a kind of clarion call to care. I'm inspired. 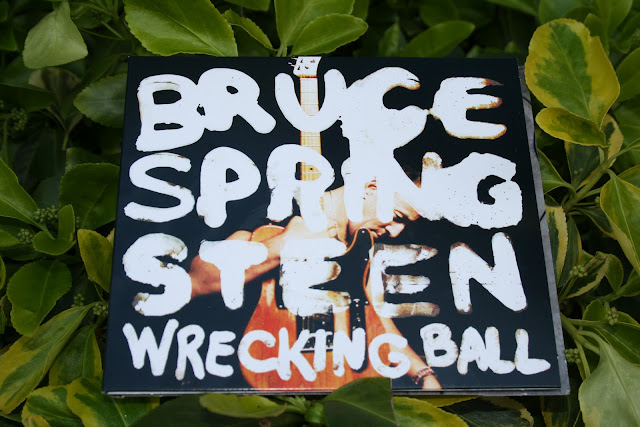 He declares in 'This Depression:'

This is my confession
I need your heart
In this depression

Sprinsteen seamlessly blends the personal with the political. His lyrics hint at a troubled, dying America that he wishes to be reconstructed, noting that 'we've been travelling around rocky ground' (in 'Rocky Ground'). The album's title track seems to invite a revolutionary (Obama? Civil society?) to destroy what has long been in shambles. He proposes: 'if you've got the guts and you've got the balls/bring on your wrecking ball.' Instead of this seeming dark and destructive the record has an uplifting, healing, optimistic  sound to it, with rousing choruses. If you're an adult rock radio listener you've probably heard the single 'Death to My Hometown.' On paper, this title sounds like an eerie terrorist cry to destroy New York City. As a song, it's like a traditional American march, demanding change for the right reasons. 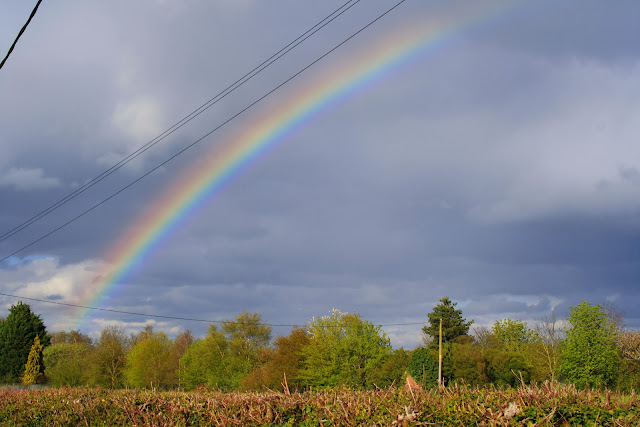 You can certainly interpret this as a protest record. Bruce rails at the fat-cat bankers, sympathises with  honest employment and the underclasses and tries to suggest that the land of hope and dreams needs to stop punishing the innocent. Even though this isn't an E-street record, the instrumentation is lush and full of empowering rhythms. You'll hear the last notes from sax stunner Clarence Clemons completing the sound of loveliness on a couple songs too. Without exception, the songs are singable and memorable.

In short, this is perfect father's day gift for your Dad. The brothers/boyfriends/classic rockers you know would be equally thrilled with your most excellent taste.

Albums seem to have died with itunes. Do you have any album recommendations? (I love most things with some catchy rhythms, so don't think it has to be too 'worthy' or 'deep.')
Posted by Lauren at 19:34 2 comments: Links to this post

Frolicks In the Bluebell Wood

While Canada has intense red, orange and gold autumn leaves and France has fields of lavender and sunflowers to beautify its landscape, England can claim spring as its season of loveliness. An English spring has chartreuse green and glorious bluebell woods. When in a bluebell wood, you have to imagine yourself as a lover of Keats, fresh and flushed under the verdant green of Hampstead Heath. 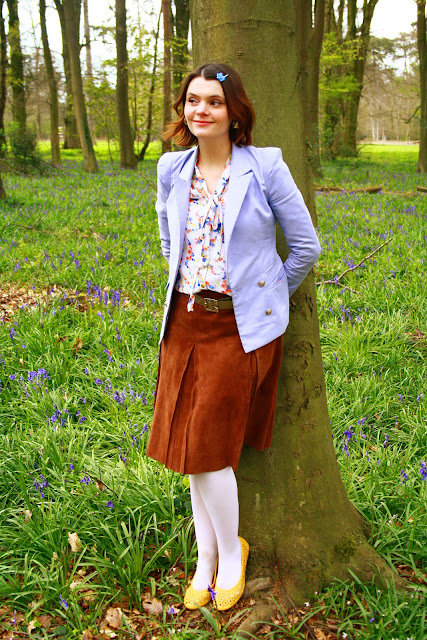 Keats describes the petite, unfurling bluebells the way that you could describe many English flowers, gardens and girls: 'sweet buds...with a modest pride.' 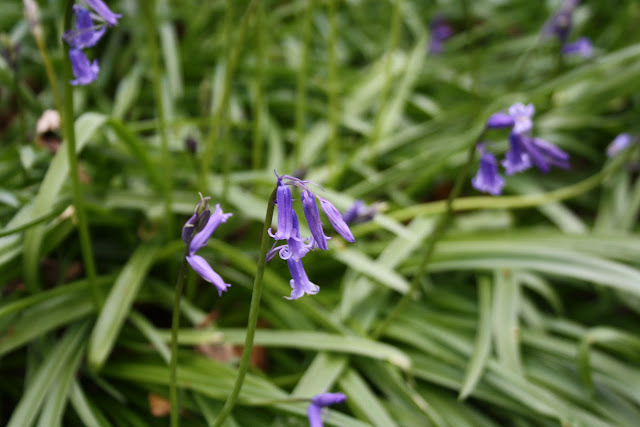 The new beech leaves were at the point before they've gained strength and still have their protective baby hairs on. 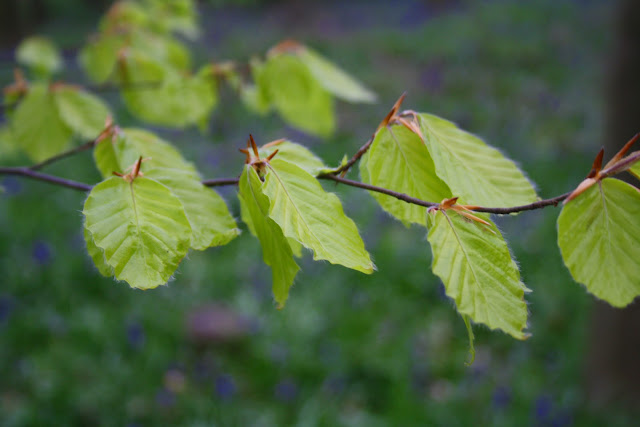 Very, very occasionally, laziness is rewarded. I bought this suede skirt at a charity shop months ago (when it was too big for me), intending to take a few inches off the waist. I never did and it has served my pregnancy waist wonderfully. I thought the belt made it a bit like a holster; I was certainly ready for a showdown in the Bluebell Wood. 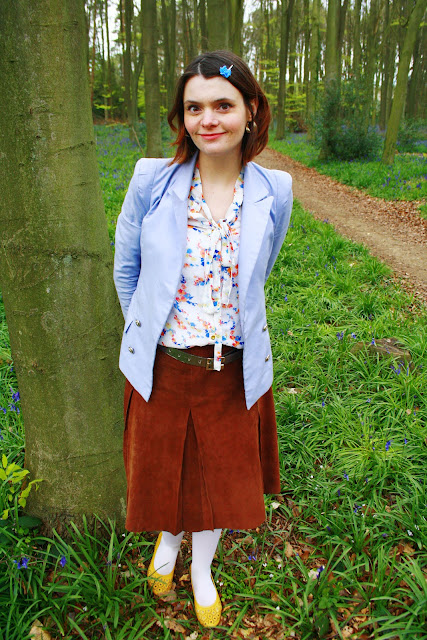 Outfit: Blazer from Korea; tie blouse, Warehouse; suede skirt, charity shop in the fascinating Coventry (if you like 1950s and 60s architecture you must go); sunshine yellow ballet flats, Clarks. 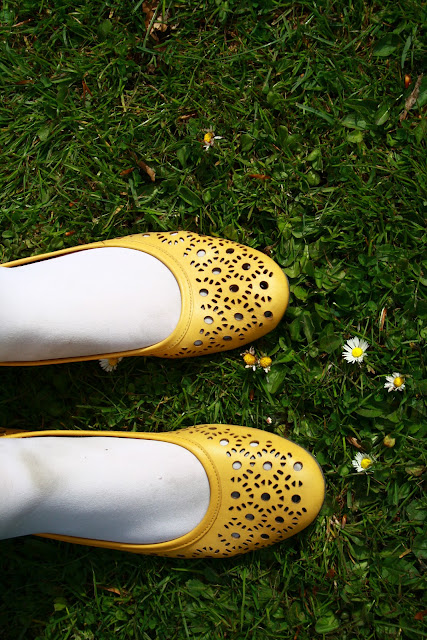 What do you love about spring? If you live in the U.K., how have you been coping with the rain?
Posted by Lauren at 19:48 2 comments: Links to this post

Lauren
I am a girl who is fascinated and bemused by fashion, popular culture, beauty, rock, food, nature, travel and comedy.